Orks With A Difference...

Well it's now mid June and over the last couple of months the intrusion of real life and a fairly major dose of painters block has left me bereft of any updates for my blog and apologies to the folks who have been kept waiting!

Having looked at the miniatures I have lying around and what projects I have want to investigate, I realised that nothing was really doing it for me so last week I decided to throw caution to the winds and try something a bit different. I currently have a couple of sculpting commissions underway and have always got a little bit of putty left over that needs using before it cures so I decided to use these leftovers for something a bit more useful than junk.

The result was these fine little chaps:

Bloodaxe Mob
I must admit that they kind of appeared a bit at a time as I had been thinking that I really wanted to game 28mm as the sculpts have real personality but lacked the space so was going to settle for 15mm instead but with the best of intentions, the figures just don't have the character of the larger 28's. 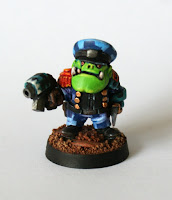 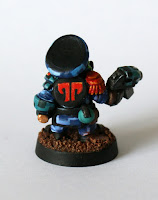 Kaptain Morgor
The result of my ponderings was a bit of an oddment and a squad of rather stylised Orks. Standing 20mm tall to the eyes, I must admit that I have grown rather fond of the little chaps and quite like their quirkiness too. Better yet, they cost me absolutely nothing and combine character and small scale, something that ticks a lot of boxes for me!
Interestingly, following the painters block, these little chaps almost seemed to paint themselves and even had enough heft to them to allow me to add some small Orky details, be it Glyph plates on the Nob or graffiti on some of their gunz. 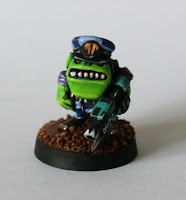 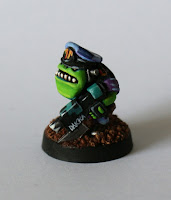 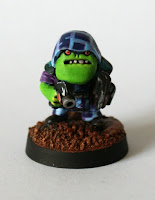 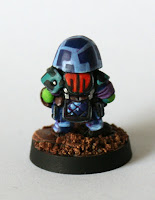 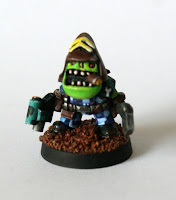 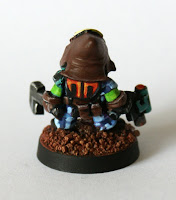 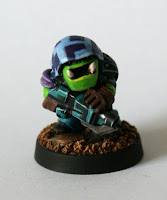 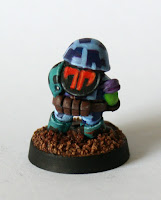 Private Bovril
I have a vague plan to flesh out the mob a bit so I can have a bash at playing a campaign of Gorkamorka and in a fit of enthusiasm, have got about a dozen or so bits and bobs from various game systems under construction, including a Warzone Dark Legion patrol and the Boar Company!
Now I have no doubt that these little chaps aren't going to be to everyones taste but it's got me back into the game so to speak and actually enjoying my hobby again which has been brilliant so expect to see lots more cartoony figures soon!
All the best!
Posted by SpacecowSmith at 09:40