I managed to play a quick game of Song of Blasters a couple of days ago featuring the forces of the Imperium being charged with driving a mercenary unit away from a strategic bunker on Viridia II. 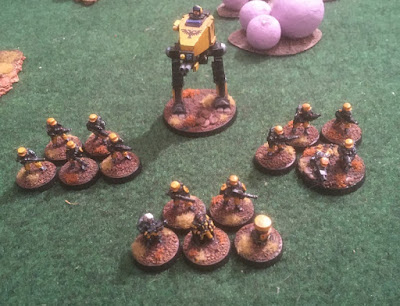 The best thing about playing games in 15mm scale is that it is really quick and easy, not to mention cheap to throw together a couple of small forces! My Imperials cost about £5 and my Mercs even less! 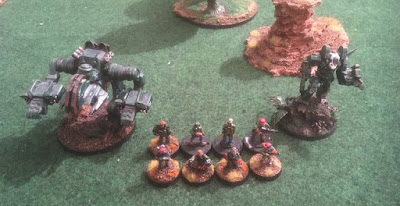 The Imperials were at a real disadvantage with only a single heavy bolter and a couple of grenade launchers as well as a heavy rifle and would struggle against the mechanised Mercs. The Imperial Sentinel with a multilaser would prove vital in laying down enough fire to keep the mercenary mechs from dominating the battlefield. 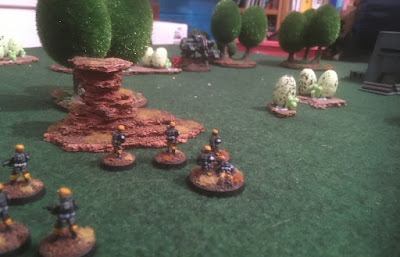 The Imperials won initiative repeatedly throughout the game and opened up with their heavy bolter on the larger mech and managed to scratch the paint on the beast before it opened up with two missile pods and blew the whole squad up. 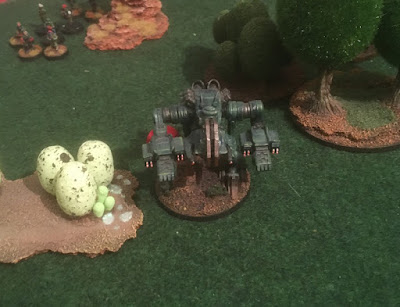 Supremely confident in it's heavy armour protecting it, the heavy mech advances on the Imperial lines firing as it goes. 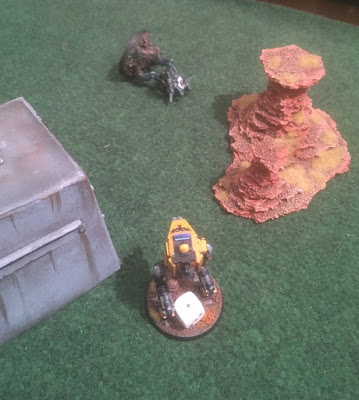 Meanwhile on the other flank, the Sentinel and Battlesuit repeatedly exchanged fire but the multilaser's high rate of fire told and succeeded in riddling the mercenary machine sending it crashing to the ground. 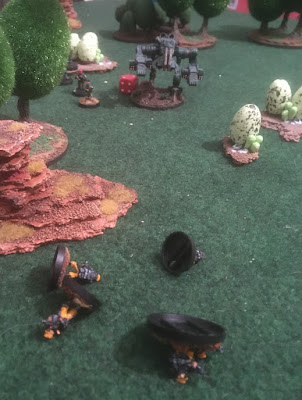 Fire from the Mech hits the Heavy Weapons squad.

Things were looking grim for the Imperials as the heavy mech gunned down the Sentinel and approached the second infantry squad who hurled everything they could at the rampaging machine. Fortunately a well placed barrage of grenades and heavy rifle fire finally brought down the beast and the Imperial command squad droid called down an artillery barrage that spooked the mercenaries and forced them to withdraw. 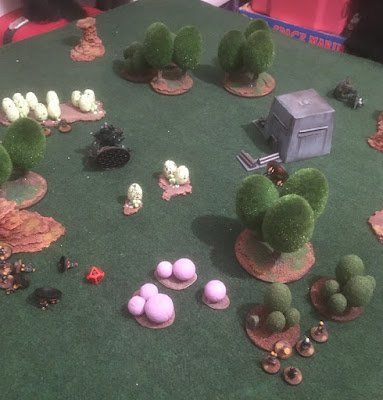 The Imperium lost three dead and five wounded whilst their Sentinel was recovered but would be in the shop for some time being repaired.

The Mercenaries lost two dead and three wounded whilst both mechs were damaged beyond repair and had to be abandoned on the battlefield.

Apologies for the ropey pics but I used my phone to take all the shots so it's a little bit fuzzy but a lot quicker to put together a quick report!

Hopefully I'll get chance to play some more games in the next couple of weeks so watch this space!
Posted by SpacecowSmith at 13:44