As promised, here's the next addition to my Lockdown project in the form of a Goff Nob: 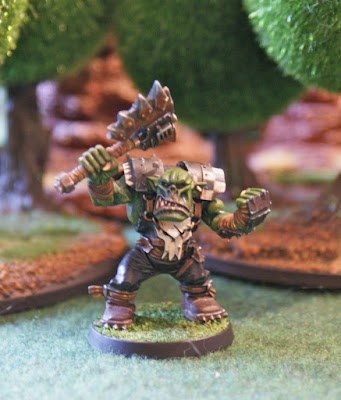 He's been sat part painted for a while and I've been chipping away at him inbetween painting smaller stuff and have finally finished the surly fellow.

I went for a bit of a hybrid 1st/2nd edition finish rather than just going all out and painting his boots red ala true 2nd edition but as he's a proper Orky Ork Goff, I thought it was suitable. 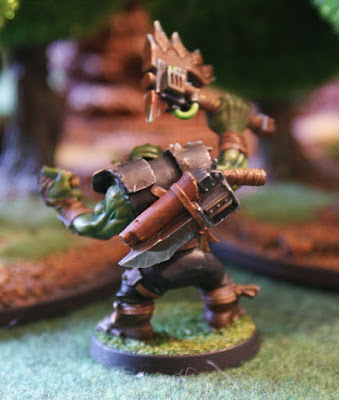 I was going to add a backbanner to him but it didn't really fit with his existing backpack so I settled for leaving him without. I may yet go back to add some decals as I just found a sheet of them to liven things up a wee bit as he's a tad unadorned at present.

I had picked him up when Shadow War Armageddon was released with vague ideas of putting together a kill team of Ork boyz for some good old fashioned 2nd edition inspired gaming but never got round to it. Saying that I do have a dozen or so other Orks of various ages lying about so who knows what will happen during the Lockdown!

Tomorrows update is pretty much sorted as is the day after with a mixture of scales and games and I am thinking of painting some 2mm gubbins to get all my Vongola and Dwarf forces finished off for the next day.

It's amazing just how much stuff I am getting done hobby wise when I'm stuck at home!

In the meantime, All the best!
Posted by SpacecowSmith at 08:53