Last week I previewed some 15mm scale Cowboys I've been painting and I've managed to finish a unit of 12 of the little chaps. 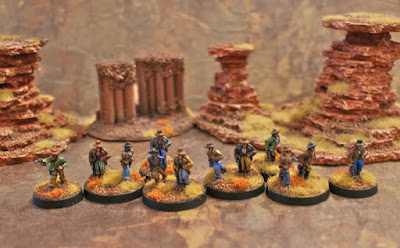 I've had the little chaps for at least 10-15 years now and some were painted (badly) as colonial militia for my old Stainless Steel Rat project and I figured it was high time that I did something with them rather than having them just languish in a box.

After a bit of pondering, I decided to base them up with a mixture of individual and group bases with the vague idea of using them as a Weird West force as I've got enough to form 3-4 units all told and with a bit of bodging, I can easily add some more unusual elements such as zombie gunfighters or warwagons... 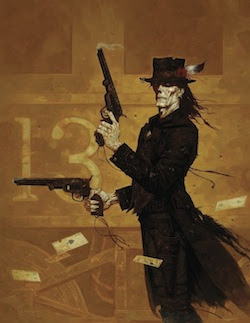 I've now got the first half of a rifle unit painted and hope to get it finished for the weekend before moving onto some mounted troops. I've also got some sci-fi salvage team done which will be getting photographed too as time permits!

I seem to have really got into 15mm painting again after almost six months of working on all sorts of other scales so we shall have to see how I get on but in the meantime, all the best!
Posted by SpacecowSmith at 13:09