I'm taking a quick break from my usual updates to post a quick look at Planet 28 by Nicholas Evans. I have heard good things about the zine sized game but not a huge amount of details so backed the Kickstarter for Nicholas' new game Brutal Quest.

I also downloaded Planet 28 and its assorted supplements as having read the blurb, it sounds just my cup of tea! 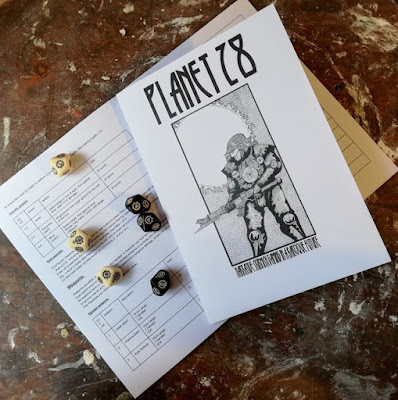 Planet 28 is a simple set of sci fi skirmish rules for quick narrative games between warbands of warriors, mutants, and outcasts.Inspired by the amazing work of kitbashers and converters the world over, planet 28 is intended as a pick up and play rule system for quick games when a longer rule system isn't viable.

A story generator for setting up and adding narrative to your games.

A campaign system that lets you build and develop your warband between games.

At a mighty 16 pages, Planet 28 seems to manage to jam in a really nice, simple game that has enough detail to it to allow me to play small skirmish games and indeed a campaign with character progression.

I'm a big fan of simple rules and Planet 28 looks like it will be great fun with models having stats for Fighting, Shooting and Agility as well as how fast they move and how many hits they take.

Playing requirements are also minimal with one just needing a handful of figures, a small playing surface (the battle report I've read featured a 30x50cm surface and a total of about 5-6 figures), and a selection of Dice.

Activation is handled by using the characters Agility score rotating down through Agility from the most to least agile which is a really interesting little mechanic that I do like. Each activation allows a model to perform two actions, be that to move, shoot, fight, use abilities or hold. The players may chose to perform these actions in any order or indeed do the same twice so it's possible to move and shoot, shoot and move into cover or indeed shoot twice! 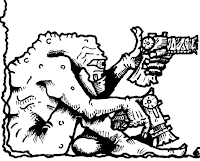 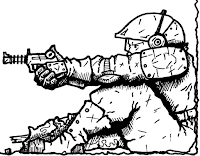 Although it's a simple game and as mentioned, only 16 pages long, I keep finding nice little creative touches such as characters losing stats when they take 50% damage which I prefer to a model playing normally until they are dead.

There's a neat little warband creation system which allows you to personalise your figures stats and really seems to be geared towards fast skirmishes with small numbers of figures centred around a strongly narrative scenario based encounter.

Not only can you alter your stats, you can add traits and abilities which while simple, can really add personality to your force. There is even a magical system to allow the use of Psykers and whatnot which looks like fun.

Weapons use different dice to damage on a successful hit and the selection given seem to be aimed towards a small, skirmish so there's no massive cannon or deathrays, more small arms and melee weapons that one could imagine a small retinue carrying rather than a large military force.

I do like the fact that the author has included the method of creating new weapons and adding some special rules to give them a bit of a quirk for each.

Finally there's a nice little scenario designer and campaign system that even includes an injury chart!

Although not lavishly illustrated, Planet 28 does have some really nice line illustrations that remind me of the old school Laserburn and are rather fun.

I plan on putting together a bit of a skirmish using Planet 28 for later this week once I have some more odds and ends painted up and will post my impressions and a battle report when I get chance but at first glance, I am really liking what I've seen thus far and am a bit surprised that I've not seen it used more.

I'll also do a bit of a review of the two supplements, The Death Machines and Death on the Periphery when I've got the hang of the basic rules. 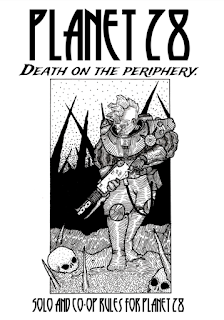 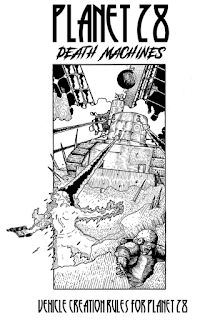 In other news, folks may have noticed I've added a couple of new pages to Tales From Farpoint as I explore my reimagined Imperium setting. I've posted up some initial waffle for it but its still a bit rough and liable to be revamped as I keep thinking of more odds and ends and things seem to be developing into something a bit different from the Grimdark of the 40th Millennium into the renaissance/neoclassical 45th Millennium.

I'm in the process of reacquainting myself with all manner of mythology, both classical and from further afield which I am incorporating into the Imperium and am rather enjoying the experience. I'll update the pages as I go and will introduce fresh elements into the odd update too.
In the meantime, All the best!