I managed to play the last game in the mini campaign I've been working on using the figures I've painted during this round of lockdowns and it was rather a lot of fun with some really unexpected moments which brought quite a bit of hilarity so without further ado, on with the battle report!

Following two encounters with the Goff warband of Uruk the Unruly and being defeated both times, Inquisitor Fisher has discovered the Greenskins base in a rundown settlement deep in the slime jungle and has decided to settle the beasts account once and for all and to make certain of it has hired some new henchmen to back her up.

Inquisitor Fishers force consists of two small units of retinue with Fisher leading Geralt the Wolfbane and Hippomaximus IX whilst Vash is leading Master Lee and Glitterberry the Eldar. They are supported by two stalwart Blood Angel Space Marines, a small force of Security troops and Blammo the Wardroid. 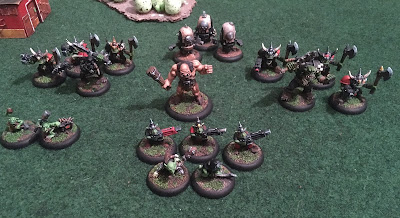 Uruks force consists of two small mobs of boyz, each lead by a Nob with Uruk leading one and Rugnug the second. They are accompanied by three Grotbots, a squad of Gretchin, a brutish Ogryn and a pair of well trained bomb Snotlings. 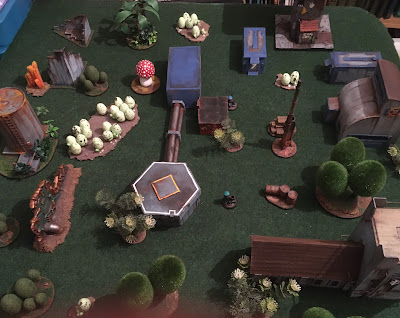 The game would take place in a frontier settlement deep within the slime jungle which Uruk has taken over as a base to loot and pillage surrounding settlements. The thick terrain may act to the Greenskins advantage as it will not allow the Imperials to use their long range firepower to full effect but Fisher is determined to defeat the Ork once and for all! 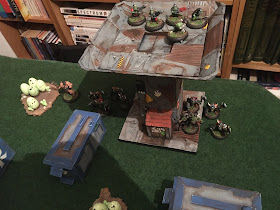 The Orks deployed around the tower with the Gretchin lurking around the roof intending to use their autoguns to good effect and cover the Orkish advance.

The Grotbots were deployed in the slime jungle to cover the flank of the Greenskins forces and were supported by the Ogryn making any attempt to enter the settlement from that direction a decidedly tricky adventure. 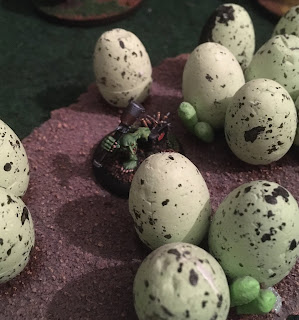 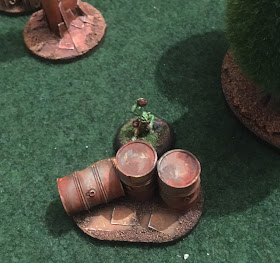 Finally, the bomb wielding Snotlings were concealed in cover at the edges of the settlement in the hopes of disrupting the Imperial advance.

The Blood Angels deployed in the centre of the board with the plan to use their superior armour and bolters to sweep into the settlement followed by Fishers party. 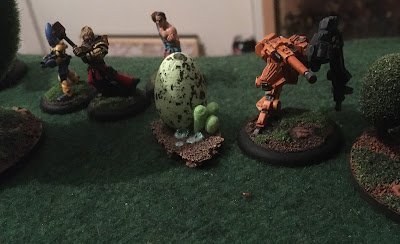 Vash and his party deployed on the flank along with Blammo the wardroid in order to get into settlement and bring their guns to bear on the Orkish defenders from the cover of the pipework that skirted the built up area. 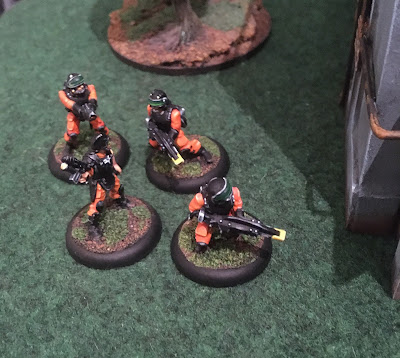 Finally, the security troops were tasked with securing Fishers other flank. 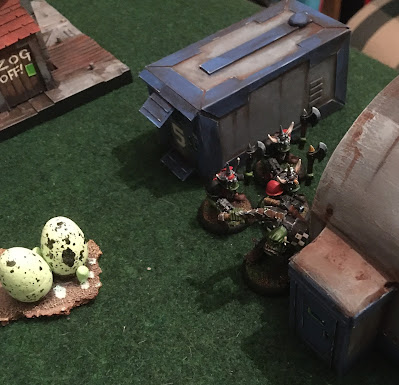 The Orks won initiative and moved forward rapidly into cover in the settlement preparing for the Imperials and grunting primitive insults, leering round the corner of the building and working themselves up into a bit of a frenzy. 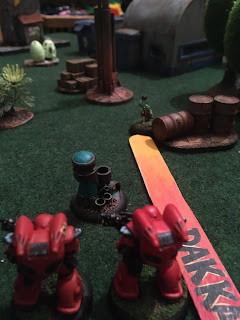 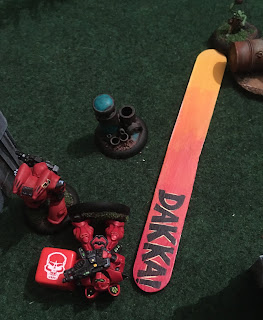 In response the two Blood Angels moved forward into the open, convinced that their mighty power armour would protect them from any incoming fire. Unfortunately, a Snotling with a bomb blew one of them up almost immediately and things were looking grim for the Imperials from the outset as how could the lowest form of Greenskin life best one of the Empress' finest? 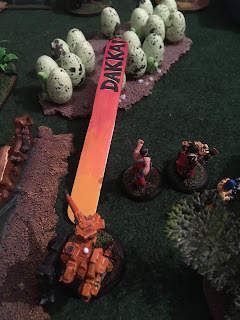 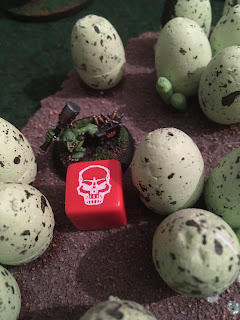 Now aware of the problem, the wardroid Blammo used its scanners to check out the nearby terrain and spotting another bomb wielding Snotling, proceeded to turn it to a green mist with a volley of multilaser fire. Whilst a considerable overkill, it was satisfying none the less!

The Grotbot had a malfunction and failed to activate, and hearing the explosion of the Blood Angels being ambushed, Vash moved rapidly forward with his minions but was confronted by an Ogryn that Uruk kept around for heavy lifting. Hefting his Thunderhammer, Vash chivied his less enthusiastic minions towards the lumbering beast as how hard would it be for three well trained warriors to defeat a single brute armed with nothing but a club? 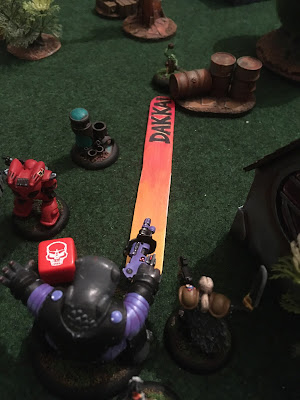 Fisher moved forward with her minions and Hippomaximus blew away the Snotling in cover with fire from his heavy bolter. Again a bit of overkill but it satisfied the Imperial sense of justice somewhat to see the grinning little beast shot to pieces.

The second Ork mob copied Uruk's example and rushed forward to seek cover and prepare for next turns assault chanting their savage war cries and frothing at the prospect of the bloodletting that would soon commence. 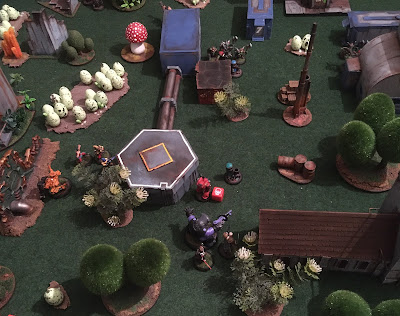 Finally the Gretchin in the tower tried to fire on the remaining Blood Angel but were out of range. 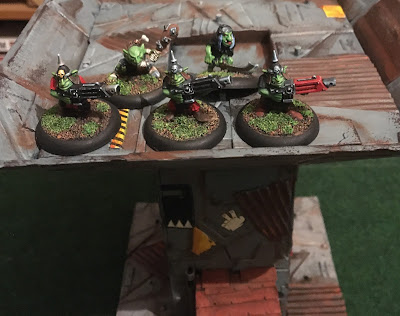 The security troopers, keenly aware of their compatriots fate in previous Ork encounters sought shelter in the Brotherhood shrines tower. 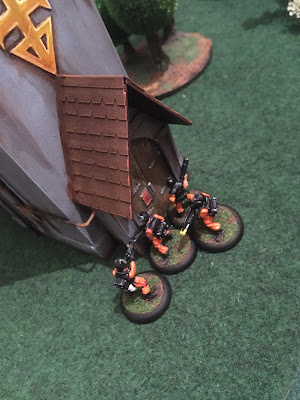 Seeing that an Ork assault was incoming, the remaining Blood Angel opened fire on the closer mob but failed to do more than receive cat calls from the grinning Orks as his bolt gun fire failed to hit any of them. 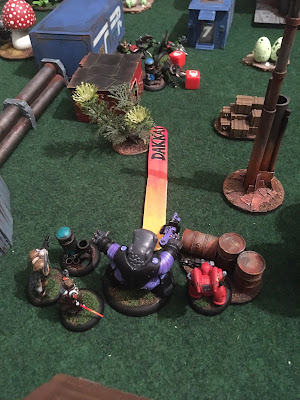 Hippomaximus, proving his worth in credits, opened fire on the leering green skins and blasted two off their feet with his heavy bolter. The cat calls promptly ceased as the remaining Orks had to dive for cover as the bulky gun toting Hippo hosed their position with explosive shells. 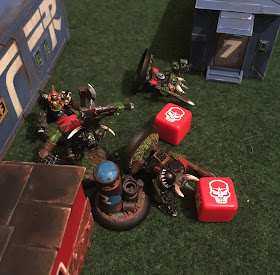 Seeing his mobs getting shot up enraged Uruk who charged his mob at the inquisitorial retinue. With a bit of a lucky roll, they crashed into combat. Uruk finding the hippo with a gun a bigger challenge than Fisher flailed at the bulky beast but despite having all the advantages of charging, wielding a power axe and being backed up by his mob, he found himself punched repeatedly in the face and badly maimed in the exchange. 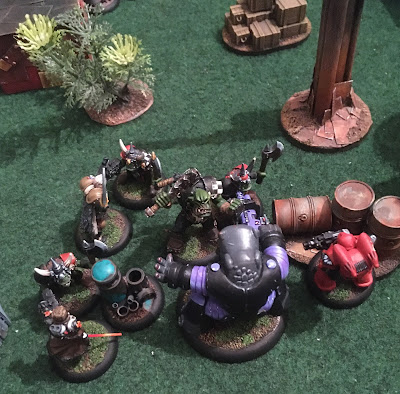 Things weren’t all going the Inquisitorial teams way though as whilst Geralt held his own against his snarling opponent, Fisher was driven back and wounded in and exchange of blows which saw her dangerously isolated. 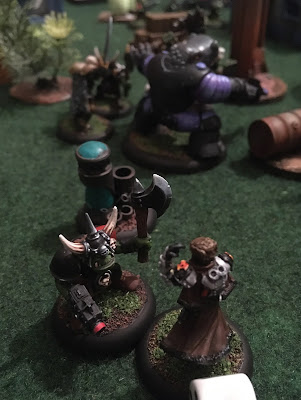 Meanwhile on the flank, Vash foolishly hurled himself at the Ogre and his martial arts minion and Eldar did likewise. The ensuing melee saw Glitterberry the Eldar crushed to death by a grubby club, his last words being "Not the Face!'' and Master Lee driven back whilst even the mighty Thunder Hammer of Vash failed to fell the Ogryn, wounding the brute but it continued to fight, despite taking the Mechanicus' hammer to the head. 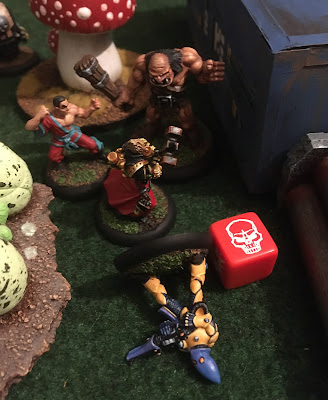 The Imperial wardroid opened fire on the Grotbots killing one but the remaining two opened fire on Master Lee, the martial arts master. Proving his skill, Lee managed to save every dice roll, spinning, wheeling and using his drunken master kung-fu to bamboozle the Orky mechs primitive targeting systems. 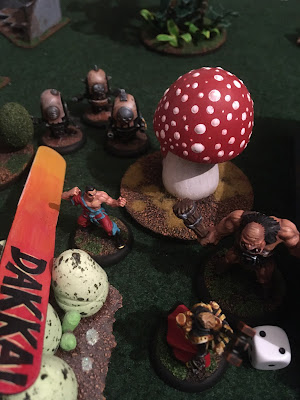 The Gretchen in the tower, seeing their boss getting a pummelling from a Hippo snickered a bit and figured it might be a plan to move forward to get into range with their autoguns but were spotted by the security troops and badly shot up. 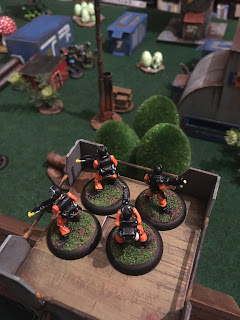 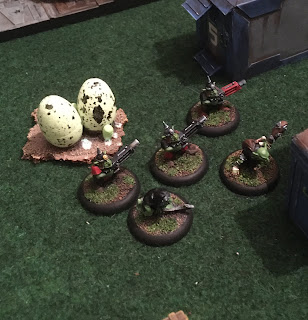 The remaining Ork mob charged into the melee in the settlement and now two Ork nobs tried to drag down the bulky Hippomaximus. Despite this they only managed to score a single wound on the beast ensuing another round of combat to follow. 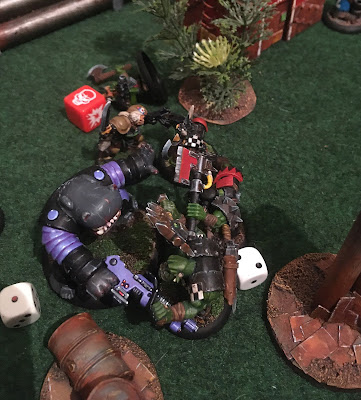 Turn three would be the final round of the game and the Imperials won initiative and Hippomaximus once again swung his bulky fist into Uruk's face, pushing it in and downing the boss. The remaining Blood Angel charged the Ork attacking Fisher and killed it but Geralt was taken out by his snarling opponent. 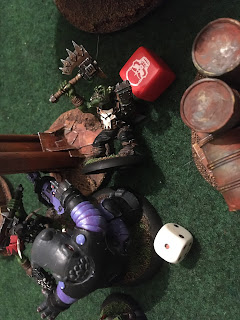 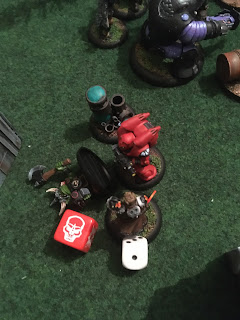 Seeing her favourite underling brought low, Fisher promptly shot the beast in the face and went to stand over her fallen minion to deliver what medical aid she could. 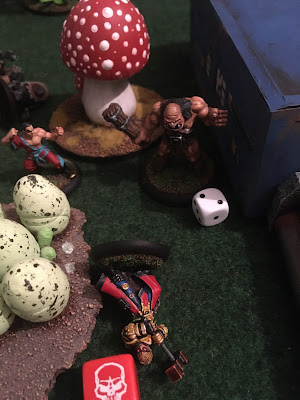 At this point the battle was won in the settlement but in the ruins on the flank, a fierce fight between Lee and Vash against the Ogryn saw Vash knocked senseless by the beast who tried absolutely everything to smash Lee but the wily martial arts master wasn’t to be put down so easily and the fight would drag on for some time to come.

Blammo the wardroid opened fire on the Grotbots managing to destroy a second before the final droid charged it and began ripping off limbs with its grubby maulers insuring that whilst the Imperial forces definitely had taken the settlement, there was still some resistance on the outskirts and a considerable amount of work would have to be put into repairing the wardroid before it was combat ready again. 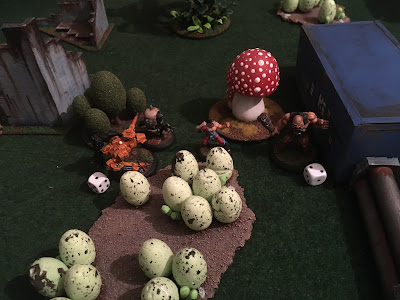 With the Gretchin decimated by another fusillade from the tower and only a single Grotbot left, Rugnug Redaxe took to his heels before Hippomaximus could feed him his own leg. The game was over with a resounding Imperial victory but at what cost? 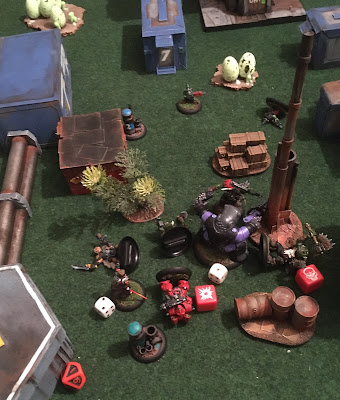 Inquisitor fisher, having poked at Geralt with her toe until he stopped pretending to be dead and reluctantly pulled himself to his feet, approached the bloody and mangled pile of goo that had been Uruk the Unruly and her only regret was that her new bodyguard had possibly been a bit too eager with his fists and there wasn’t much left of Uruk to stuff but she was sure that Vash would be able to cobble something together from the carcass to display on board the Shrike.

The battle was won, the campaign finished with Imperial honour restored. Fisher has new underlings and an interesting conversation starter in the form of Uruk's stuffed head but have we seen the end of the Greenskin menace as Rugnug escaped?

Whee! I had a great time playing this game which had quite a few unexpected moments but without a doubt Hippomaximus IX was the man of the match, singlehandedly beating an Ork boss to a pulp and mowing down several of his underlings too. I had given him decent close combat skill but he kept rolling amazingly well while his opponents rolled incredibly poorly, for example on Uruk's charge he had a CC of 7 plus his underling for +1 plus his charge which was another +1 but rolled a 2 on a D10 whilst Hippomaxumus rolled a 10 plus his CC of 5 which was enough to stop the Ork in his tracks.

I tried out some new activation ideas I had based on Epic Armageddon where units can activate normally but may try to push an extra activation but it gets more difficult the more times you try to do it and it worked really well with units moving to support each other or charging that extra bit just at the right time.

I still need to do a load of tweaking and reworking to the rules but they are slowly coming together and I've got quite a few ideas for further games to follow on the campaign involving Orks boarding The Shrike to recapture his head and attach it to a new body so Uruk can live again. Theres also rumours of a Pharon artefact that has caught Fishers ear that may need investigating, not to mention the Eldar Craftworlders coming to find out what happened to Glitterberry...

I could have done with some more Ork Boyz to bulk up their mobs a bit and if I'd had a couple more in each mob, I suspect things would have turned out quite differently than how it played out in the game.

It's interesting to see that the more I've played, the more I've painted and the more inspiration I find for further forces, games and campaigns and it's looking like Fisher's retinue is going to be kept busy in the coming months but in the meantime, All the best!