I've really enjoyed working on the mono pose early to mid 90's figures of late so decided to have a look to see if I had anything else to paint.

After a bit of a rummage, I found an Ogre from the old Darkworld boardgame: 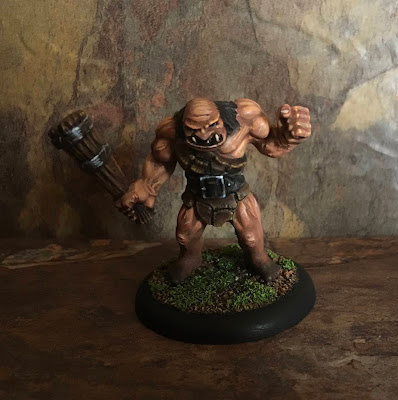 He's a bit of an odd figure with a nicely detailed musculature for his arms and upper legs but his torso and feet are a bit poorly defined. I had added a bit of greenstuff at some point to his head as he was a bit too flat topped than I'd thought acceptable. I also added some iron bands around his club.
I also experimented a bit with the fleshtones and used a leather brown for a base coat and worked up as I didn't like the idea of a healthy pink flesh for a brutish Ogre. I quite like how it turned out and feel it give the figure a bit of a Dark Age of Sigmar sort of finish and will make use of the effect again in the future. 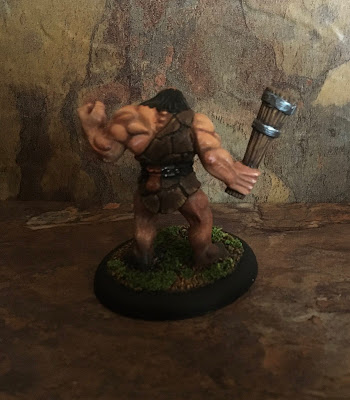 I did have a load of Dark World figures but having looked in my bits box, I only seem to have a Mummy left now which is a bit of a shame as I quite enjoyed painting the Ogre from the set and I'm thinking of sourcing more at some point.

Speaking of which, I seem to be falling in love with the monopose plastic figures that typify GW from the early to mid 90's when they started pushing plastics for armies and the classic boardgames of the era featured the same sort of goodies. Back in the day, I was rather dismissive of them as I felt that the single poses just didn't look interesting but now I'm reassessing this opinion as painting them really is a satisfying process.

The combination of simple details and pose really seems to lend itself to painting and I'm thinking of stocking up some more of the assorted gubbins for some RPG lite encounters where I need a certain number of random beasties without spending a fortune!

In other news, I have almost finished the Fortnite tower that I picked up yesterday and will post some pics of the finished piece in the next few days but in the meantime, All the best!