As I've mentioned in my previous post, I'm keen to try and incorporate a more RPG lite sort of element into my games and with this in mind, I've had a bash at using some ideas that I've had lying around for a while to see how it goes.

Now I could go out and buy some RPG stuff and use an existing campaign but I thought it would be fun to have a bash at creating my own using a bit of a random system and see how the story develops. 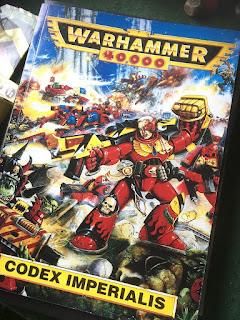 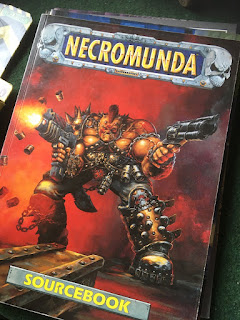 To begin with I grabbed a few books off the shelf, mostly at random and picked a selection of random pages and words to string together a term or sentence to get things going. Handily I picked Hathor, Armour, Monks, Chillingly and Devoted. This gave me the basis for the story to develop, resulting in Fisher and co hearing of a lost artefact and some shady monks who are searching for it! 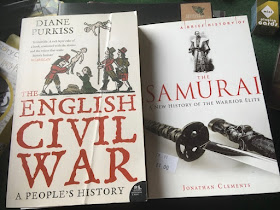 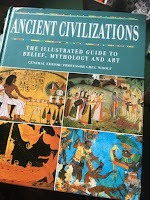 Random books from the shelf

I also used some random dice and Rory's Story Cubes to help build a narrative which sees Fisher departure interrupted with shocking news and a side quest, which may actually be tied into the main campaign dragging her away from her pursuit!

As I based Inquisitor Fisher loosely on Phryne Fisher from the Miss Fisher Murder Mysteries, I will be introducing characters from it and rather fascinatingly, one of the antagonists we shall be meeting ties in really well with the narrative that is developing!

Rules wise, I'll be using Planet 28 for the most part as it is endlessly convertible and I really enjoy using for super small skirmishes such as we shall be seeing in the forthcoming weeks. I will probably use my own bodged rules for larger scale fights if they crop up and also plan on using the story cubes and random word generator approach for developing the plot, random events and whatnot to keep things interesting!

I'm also going to be adding lots of papercraft gubbins to allow me to play through games quickly and easily and the first batch, the prisoners and guards that will be featuring in the first of the interlinked scenarios: 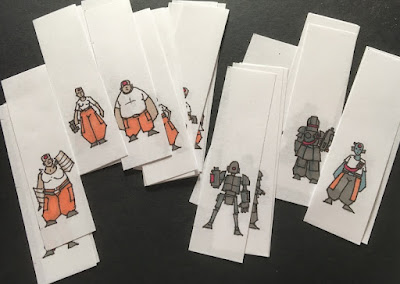 Inquisitor Fisher and her retainers have heard rumours of a powerful item of Lostech known only as Hathor's Armour. Virtually nothing is known of this artefact other than it will grant those who possess it and understand its workings great power.

The rumour stems from a shady contact of Fisher's in the underworld of Freeport City, named Susan, who has been hearing chatter that somebody is trying to discover the resting place of the armour for nefarious reasons. Unfortunately the only information Susan has been able to uncover is that it is not located on Farpoint but that a group of chillingly devoted monks of an order nobody appears to be familiar with have recently departed Farpoint after asking some pointed questions about the item.

Using her Inquisitorial authority, Fisher has discovered that the monks, calling themselves The Translated Order of Chronos boarded a freighter bound for the backwater planet of Strade.

Realising there isn't a moment to waste, Fisher boards the Imperial Corvette Shrike and prepares to head off in pursuit but as they leave the spaceport, an ensign rushes onto the bridge with a message from the Shrike's Astropath. The Astropath has intercepted a distress call from the Imperial prison of Bore IV, a maximum security penitentiary located in a dead system a short jump from Farpoint.

Fisher is about to dismiss the call as she has more important tasks at hand, namely running down the Translated Order and securing Hathor's Armour for the Imperium but a glance at the message sends a cold chill down her spine as one of the inmates of Bore is none other than Professor Murdoch Foyle.

Cursing, Fisher orders the Shrikes captain to change course and head for Bore IV with all haste...

Whee! With only a little effort I seem to have got my campaign off to a thrilling start with the Inquisitorial agents rushing to the. prison world of Bore IV to find clues to follow but first they'll have to rescue the prison governor from a full scale uprising which will be the focus for a game of Planet 28 in the near future once I've got the elements put together and I'll post a battle report in the next few days.