I have waxed lyrical about the OTT nature of the Grimdark setting that 40k seems to have found itself in with its dark age gloom and medieval gothic view of things. All fine and well if you are into that but I find myself rather unhappy with it and have pondered how it could be changed to meet my own outlook on things.I have looked at several of the races in the game and how they could be re-imagined but what if the whole setting got a shift? The idea is to bring the setting out of the medieval and into a more Tudor/Age of Enlightenment type of approach.New technologies are being created and barely understood before being put into use and a period of exploration and conquest has begun with the Imperium going out to settle the galaxy. Unlike the GW setting, the Emperor is not a mouldering corpse kept alive by arcane technology but is alive and well, well at least his descendants are in the form of Empress Lionstone XVI. The Empress sits upon the golden throne of Terra and the High Lords, great houses and all manner of adventurers, cads and villains flock to her palace in search of patronage.Space Marines are the Empresses elite shock troops, genetically engineered to be the superhuman warriors of legend but they are decidedly more down to earth than the traditional warrior monk of GW fame. They are professional soldiers but have the same needs and ambitions as any human but most of these legions are fanatically loyal to the throne of Terra, if not the person sat upon it.Humanity now numbers in the untold Billions and thousands of star systems are colonised, from peaceful agri worlds to chaotic hive worlds and industrial worlds and everything in between. Each planet is ruled by a Governor charted by the Empress herself to rule in her place, keep law and order and more importantly collect taxes. Each world will have at least one regiment of Imperial Guard or some sort of planetary defence force to defend their homes from alien invasion as despite everything, it is still a dangerous place in the 40th Millenium.Alien species are an accepted and relatively common sight throughout the Imperium with many cultures under the benign rule of the Imperium although rebellions are common. One race that has thrived in this setting is the Ork. From border raiders and savages to rulers of large swathes of space, these greenskinned creatures have even found a place amongst the ranks of the Imperium with regiments of Askaris and mercenaries often used when Guard regiments are stretched thin.The Squats and other abhuman races also form a significant minority amongst the Imperium but there still remains a stigma on many worlds where anyone different is to be mistrusted and slavery is not unheard of in the outer colonies.Things aren't all a bed of roses though as the resurgent Eldar constantly war upon the Imperium to reclaim large stretches of their lost empire and constant raids by Eldar pirates have become a fact of life out on the rim.More ominously, there are murmurings of rebellion amongst the Imperiums citizens as humanity chafes under the heavy taxes and constant need for supplies and manpower in the many warzones that dot the Imperium. Malcontents and even the notorious Traitor Space Marine Legions have time and again plunged while sectors into chaos while cults, secret societies and even greedy corporations seek to undermine the Empresses realm.Worse yet, from the depths of space, the Tyrand menace has appeared, worlds have been stripped of life and entire armies sacrificed to hold the voracious xenos at bay. The Empress has ordered her Space Marine Legions to wipe out this deadly threat and the engineers of the Adeptus Mechanicus, the cult of the Machine on Mars have begun experimenting with genetic engineering using strange new bio weapons captured from the Tyranids and retro-fitted to be fielded by new races of augmented men.This brings me onto the setting where the action is going to take place. Farpoint is a sector on the western rim of the Imperium and contains seven inhabited systems and has just received a new Governor General, Baron Laars van Dorn. The Empress has given von Dorn the position as a reward for some skullduggery in the past and she has commanded him to set forth exploration teams to find potential worlds suitable for colonisation or mining. 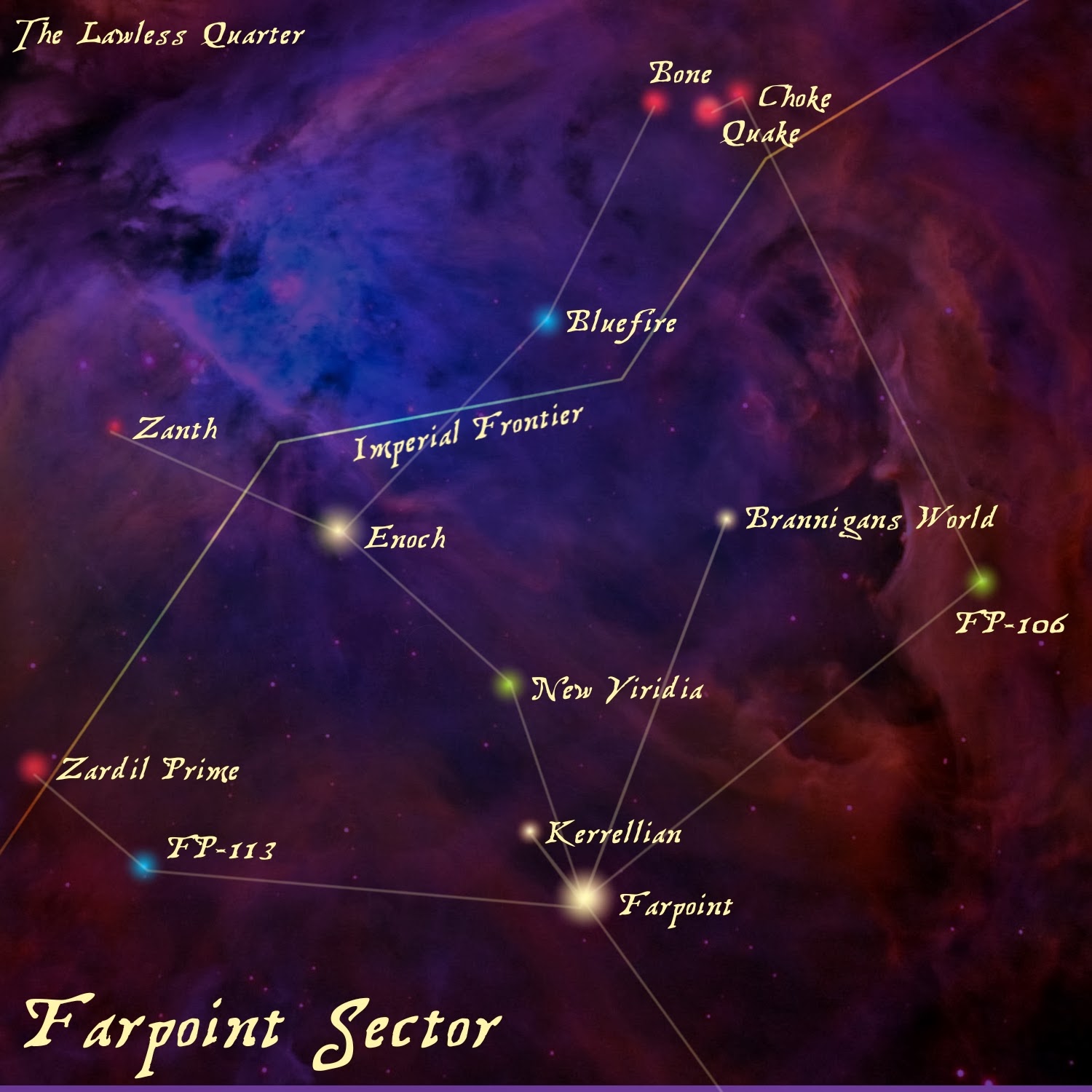 Sector Map
Farpoint has the potential to both enrich van Dorn and his clan, and provide the Imperium with valuable mineral wealth and colonies and already several lesser families, Rogue Traders and corporate interests have arrived in the sector in preparation for the gold rush that is bound to happen with the opening of the borders.
Farpoint itself is a rather arid world but contains rich sources of mineral wealth and several great mining concerns currently have holdings there, including at least two Squat Guilds. To this dusty world van Dorn has brought a full regiment of his own Imperial Guard to supplement the PDF force and the Empress has loaned him a company of Ultramarines under the command of Captain Tiberius Aquilonius to help bring order to this lawless region. 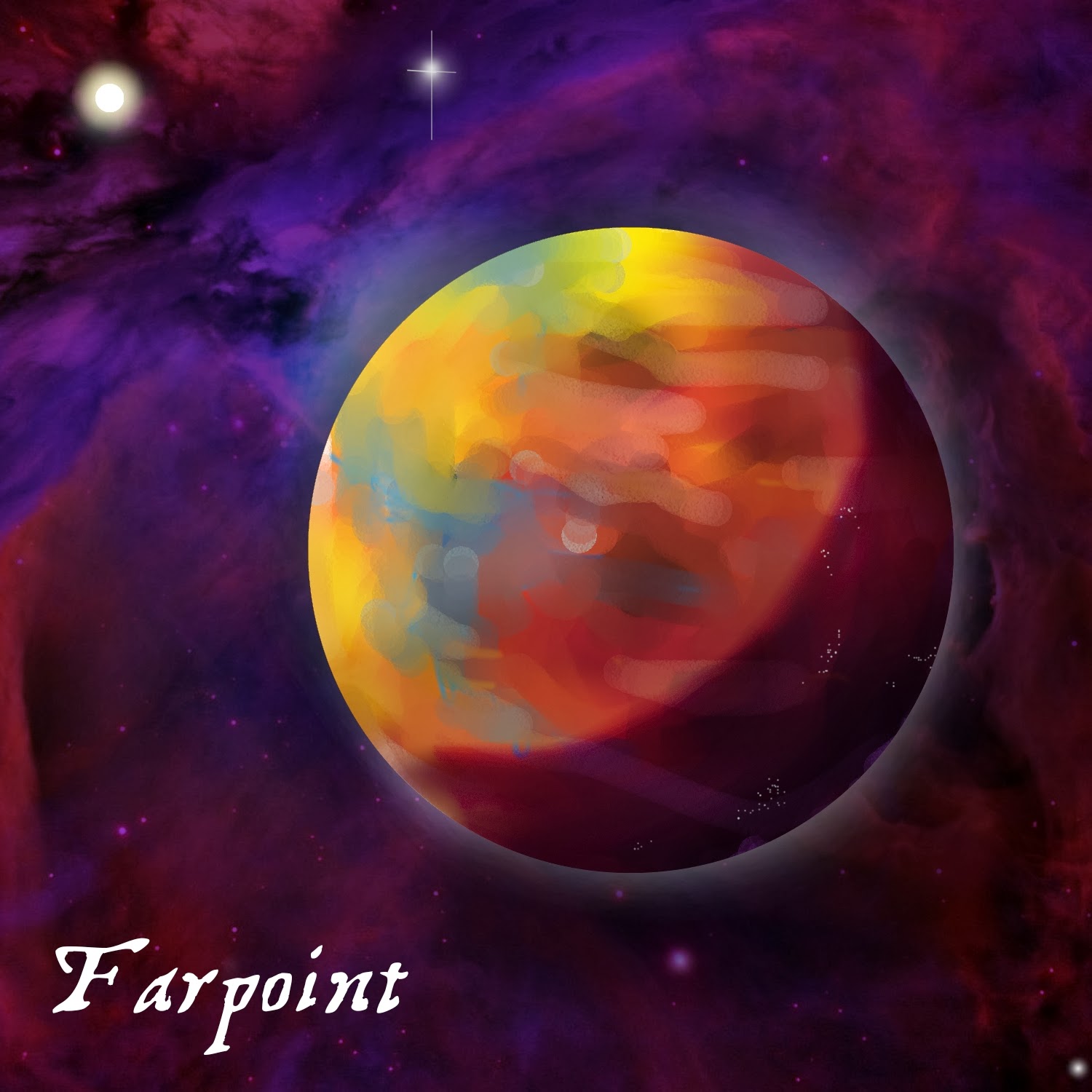 The Planet Farpoint as seen from space
Van Dorn faces a great challenge with his arrival as the previous Governor, Alexandr Vosk, was removed for being corrupt but still resides in the capitol city of Freeport, surrounded by a veritable army of thugs, toadies and courtiers and rumour has it that Vosk has been tapping his underworld contacts to provide van Dorn with a warm welcome.
Fortunately the new Governor General is no stranger to intrigue and his agents are already conducting a secret war on all seven worlds with Vosks underlings. The Empress is fully aware of the situation but is confident that the Baron will rise to the challenge and subdue Vosk before things get out of hand. 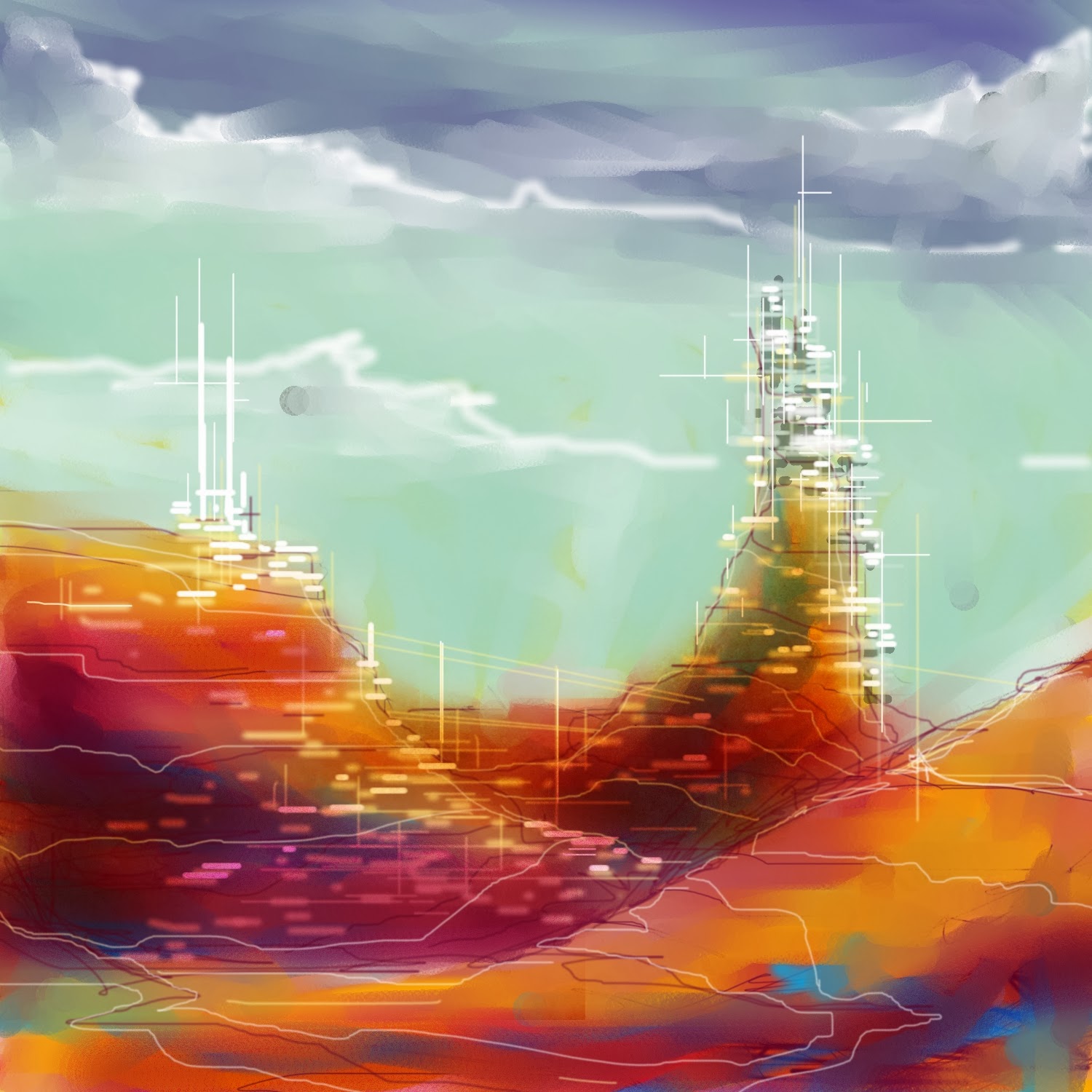 Freeport, the capitol city of Farpoint
Word of the unrest has spread across the border and several Eldar pirate flotillas have been seen cruising the shipping lanes. Word of the Empresses attack dogs arrival has also spread to the rebel held world of Bone and several raiding parties have been dispatched to sow chaos and disorder along the border in hopes of dissuading the Imperium from sticking its nose into local matters.