As I mentioned in my previous post, I've been slowly getting some of the figures I've painted over the last few months photographed so I can get them on the blog so here's the latest batch in the form of some Orks and a Necromutant! 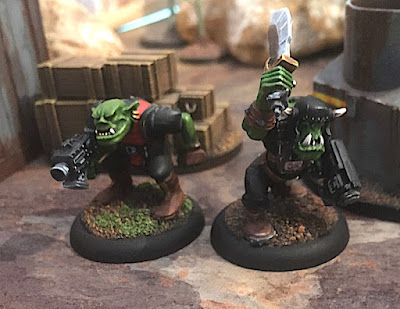 Some of you may remember from a few months back me bemoaning the fact that I'd painted an Ork that was so dull that I'd all but given up, and here he is. The modern plastic GW Ork is an incredibly uninspiring figure to work on and I have no idea how folks can manage to churn out an entire army of them but he's done and dusted and will probably be classed as a Skarboy for my small warband.
The other figure on the left is a classic plastic Ork which I completed the other week and he was an absolute blast to work on compared to his modern descendant. The detail is softer, the pose a bit less dynamic but despite that he oozes character and almost painted himself and I'm glad I've still got another dozen or so of these guys sat awaiting a coat of paint as I really don't think I can bear painting another modern GW figure.
Next up, Ironically is another modern figure, this time a Mantic Marauder converted into a Necromutant for some Warzone skirmishing: 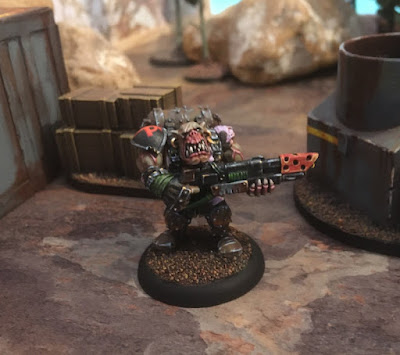 The figure itself is a Manic Marauder body from their Deadzone set with a GW head and old early 90's shoulderpad from the Ork set by GW. If I was to do the conversion again I'd probably sculpt a more suitable head but he'll do until I can get my hands on some official miniatures!

On a side note, the figure is made from Restic, a weird slightly rubbery plastic that had some truly appalling mould lines which needed carving off and doesn't fit particularly well together either but with a decent coat of paint he's turned out quite nicely.

My next post will cover some wild ramblings about solo gaming and scenario design but I need to get my notes into some sort of order so it may be later in the week before I get it posted up so until then, All the best!